By now you’ve probably figured it out.  The topic – beauty rearranged – it also happens to mean – “Miriam’s life,” or “whatever crazy idea Miriam cooks up,” because all in this world is rearranged.

You know this? Yes?

Wednesday night. 3 am.  John turned in his sleep and his finger brushed against me.  I nearly hopped straight out of bed.  Wide awake.  Turn on all the lights.  Pull off all the sheets.

I was looking for “slither.”

Slither was mercifully rescued by hubbs at work.  {He did NOT earn bonus points for this.}

I say mercifully only to be pc.  I don’t like snakes – at all.

First it was a day.

Then hubbs bought a terrarium and “pinkys” (frozen baby mice).

I lost ground by the minute…and I conceded.  I conceded because of these kids and their wild-eyed wonder. And wonder there was, for a few days.

BUT while hubbs and I hit the mountains – slither escaped, as in GOT OUT OF HIS TERRARIUM.

Who thinks one of the 2 dogs in the house got him?

Who thinks he made it out the door?

Who thinks he still up in this place waiting to scare the living daylights out of me?

A friend suggests I burn the house down.  Yes, this would solve the problem…

Last night Blue laughed as I told him my middle of the night snake-scare story.  This morning he was a flurry of kicking the bed and talking at 6.  When I went in he was excitedly staring at the top corner of his bed, huge smile.  I’m pretty sure he was up looking for slither.  (The kid does NOT share my fear.)

It’s not so comical for me.  I fear the snake.  I fear him getting larger, harming my babes.  I know it’s not likely.  I think the odds that he’s still here get slimmer every day, but still I would like some certainty.

Slither and certainty – I don’t think they go hand in hand.  And in a world of uncertains, it’s what I crave everyday – to know what’s next – to plan – to be prepared.

When it comes to the things that slither in this world:  I can do my best, I can clean my house, search the rooms, be on the lookout, but the fear?  What is there to do with that?

Fear – 4 letters that seep deep into your skin before you even realize you’ve had contact.

Sometimes I have no idea that I’m knee-deep in it, until I find myself in prayer.  Who wants to admit fear?  But fear is the thing that has us plotting how to handle the upcoming crisis, how to deal with the neighbors dog, how to breath through the move, the tantrum, all of it – isn’t it?

I’m not sure if fear isolates or is itself isolation.  Both?

Fear is thinking that you are alone, and it is acting as if the reality you foresee has already happened…as if the snake is in the bed –

as if it’s just you and the snake.

But it’s never just us and slither, is it?

So do not fear, for I am with you; do not be dismayed, for I am your God. I will strengthen you and help you; I will uphold you with my righteous right hand.  –Isaiah 41:10 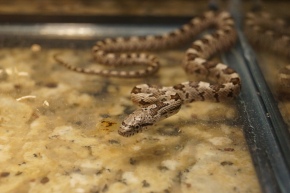 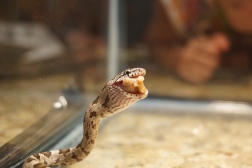 if you'd like to email, you may do so at arearrangedlife at gmail dot com Cancel reply